The healer of Canggu 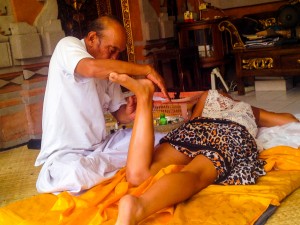 As we all know, surfing is not as danger-free as, let’s say…chess. It’s a lot of fun, but from time to time little accidents are bound to happen as you are dealing with the all-mighty force of the ocean, a very hard surfboard, and of course…other people.

The other day, someone took a wave as I was paddling out. She didn’t turn, I tried to dive under the wave, long story short: she crashed into my ankle.

What to do when you have a surf accident and don’t want to go to the hospital? You go to the local healer. At least, that’s what my Balinese landlady recommended. So I did, and here’s what happened:

My landlady sat me down on a bench for what turned out to be a public spectacle. I looked around and saw people from all corners of the world waiting to be healed. Pak Sirkus was bending a man’s leg in ways I never thought humanly possible, and I heard him growl in pain as some bones in his ankle were popped. My own ankle twitched at the sight of it. When the ordeal was complete, the man sat next to me and told me Pak Sirkus knew he had broken his rib a year ago just by pulling his toe. Also, the healer mysteriously seemed to know about the two pins the man had in his knee, even though they couldn’t be seen or felt from the outside. I was a bit apprehensive, but my curiosity got the better of me.

Next up was an Australian woman who suffered from a hernia. Minutes of painful cries later, she stepped out, winked at me and said: “Once you’ve had a baby, you can do anything!” I was really starting to worry now, thinking that this might be the most painful thing in my life so far, as I haven’t given birth yet. By the time it was my turn, I was as pale as a hospital wall.

Pak Sirkus summoned me to come over and sit down. Noticing the terror in my eyes, he said “Don’t worry – tomorrow you’ll be dancing again!” Not entirely convinced of the truthfulness of his words, I tried to relax. He started off by pressing a stone into the swollen parts of my foot to figure out where the pain was located. He then proceeded to contort my body into the weirdest positions. When I cried out in pain, he looked at me, smiled and said: “No pain, no gain!” Pak then grabbed a book about human anatomy and explained that there was something wrong with my ligaments.

He covered me in holy water and all kinds of oils. When he got to my belly he stopped, looked at me very seriously and said: “Baby!” I was paralysed.
“No, it must be a mistake!” I exclaimed. He continued to repeat, “Baby! Baby!” Then his face muscles loosened and he burst out laughing. “Baby oil!” he said. I laughed hysterically in relief. 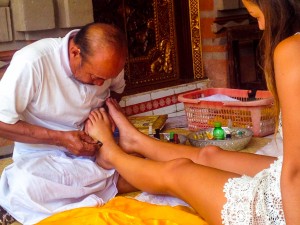 Pak Sirkus took advantage of my relaxed state and used the opportunity to crack another 10 bones in an instant. Still in shock about the news of a possible pregnancy and the pain from my cracked bones, I stood up. Mister Circus ordered me to walk. My body felt strangely light as I attempted my first steps. Overwhelmed by the overall strangeness of what I just witnessed, I noticed that my foot was actually half the size of what it was before. I was walking! Of course it was still painful, but it felt a lot better.

The rest of the day was a bit of a blur. I felt like Pak Sirkus had opened up some energy streams that had been closed for a long time. The whole day I had a splitting headache and a tingling sensation in my right hand. But when I took my bandage off in the evening, I was horrified by the size of my ankle. It looked like a distorted elephant’s foot, and I went to bed desperately hoping it was a classic case of “it gets worse before it gets better” .

Now I would love to write about miracles, but the next day, my foot was insanely swollen and painful, and I was still very far from being able to dance. Having said that, it didn’t stop me from trying. After all, the guy is a healer, so he should know, right? So, fuelled with enough alcohol to kill a large mammal, I ignored every sign my body was giving me (mayday!) and went out until 5am (don’t try this at home).

By now, you can probably guess how this story ends. My self-abuse didn’t turn out too fruitful, and after examining my x-ray once again, the orthopaedic found that my bone was cracked. He put my leg in cast, tutting.

Not even a healer can be expected to cure a crack in a bone, so it’s really no wonder Pak Sirkus couldn’t perform his miracles on me. For all other ailments though, I would definitely recommend his services. It’s a hell of an experience: you will limp in crying, and walk out smiling (if I am to believe the testimonies of others).